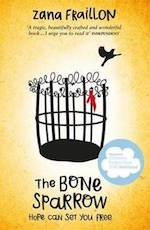 A modern A Thousand and One Nights

Australian story about a boy in a refugee camp.

(Only in English)
A friend recommended an Australian book about a boy born in a refugee camp. Subhi is a Rohingya, an ethnic Muslim minority, living in a predominantly Buddhist majority in Myanmar and seen as one of the most persecuted people in the world. Subhi’s mother and sister end up in a refugee camp, such as there are in Australia, but reading the book, you realize the situation is not much different from the refugee camps in Europe.

Subhi’s world is no bigger than the camp he lives in. He has never seen his homeland, nor his father who said he would come to get them out, nor has he seen the ocean that enters the camp in his dreams at night, with waves lapping at the tent which is his home. When his only friend is transferred to another closed part of the camp, he struggles not to be lonely and adopts a plastic duck as a new friend. Subhi has learned to read and he collects stories told by his mother and other people. They are his precious treasures. He meets Jimmy, a girl from the Outside, who has found a hole to enter the camp. She cannot read, and brings the diary of her deceased mother to hear via Subhi those stories she has nearly forgotten.

The book is full of wonderful stories. A modern version of A Thousand and One Nights, told to and by a child who uses them to have a life inside a refugee camp. Subhi’s sister teaches him that people living in the camp are the forgotten people, invisible, so ‘non-existing’. She makes secretly photos of the camp for the Outside World, in order to exist. Subhi finds through the many stories about his people, and others, that he also exists.

Although conditions are harsh, guardians cruel, food barely edible, the story itself sounds like a fairytale. Not only the stories touching, but also the style Fraillon uses to tell about life in the camp is well crafted. Subhi’s collected stories may remind Aboriginal ones, but I am sure all people, like Jimmy’s mother, have plenty of such tales. Originally intended for children, this book is also for adults: a universal story that has to be read in order to remember all those hundred thousands of people, put away in camps, nearly forgotten. It is not only a story of the world today, but also a wonderful reading experience full of hope.

Other books to read: