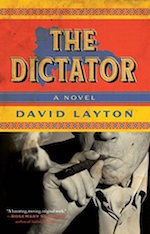 Canadian novel about a grandfather who survived WWII thanks to the Dominican dictator Trujillo.

Reading The Dictator by David Layton, more than once I had to think of Alger Hiss, the grandfather in Michael Chabon’s Moonglow. Is it because the two novels tell a story about aging men having survived a part of history not well known, or is it the way they turned out as grumpy old grandfathers?

Karl Kaufmann tries to keep up appearances, not admitting that he is forgetting more and more, dementia on his doorstep. Alger Hiss does not have any illness threatening him, but behaves like a young man, going after women and still wanting to be a hero. Both are betrayed by their dreams: Karl by the girl he thought he could marry, Alger by his hero Werner von Braun.

Both Layton and Chabon mix up times in their stories: Chabon weaves the past in repeating patterns in the storyteller’s time, while Layton choses a more radical approach and slowly shifts towards the story of a hidden past.

The historical line about Werner von Braun and the development of his rockets is woven throughout Chabon’s book, while the part about the jewish settlement in Sosúa in the Dominican Republic of dictator Rafael Trujillo is nearly a story on its own. I loved Moonglow because of its beautiful way of storytelling. I loved The Dictator because of Karl Kaufmann, although Alger was a daring character not afraid of anything, whilst Karl was a man to the rules.

Not a rebel, but a man who dared to take decisions: quitting his family in Germany to escape the Nazis, quitting his family in the Dominican Republic by regaining his lost soul, doing the same again in America. Son Aaron is right to be angry because his father once left him: it seems to be a pattern in Karl’s life. All Karl wants is to continue his quiet life with his little habits: lighting up his beloved cigars, sitting in his chair undisturbed. When Aaron thinks his father cannot live anymore on his own, he moves him into his own small apartment that he periodically shares with his 16 year old daughter Petra. Aaron is not happy, barely knowing his father because he was six years old when Karl left him and his mother. Karl is not happy because he looses his freedom, not willing to accept how poor his memory function is. It is Petra who tries to settle this household full of tensions and unveils many things Aaron never knew about Karl. The story, bouncing back and forth into Karls life, is elegantly written. The thoughts of Aaron, more often than once painful, angry with his dad because he never was a real father to him, and at same time desperate to be a good father for his own daughter.

It’s a story about broken families: a son, not knowing his father very well, not knowing how to love or respect him, a father who left his parents and sister when very young in order to save his life, now forever feeling guilty, not able to stay long in a family of his own. And there is the interesting historical line: the Dominican Republic was one of the last countries welcoming Jews fleeing the fascists and WWII. Fleeing from one racist to be saved by another.

The book reminded me also of Here I am from Jonathan Safran Foer, where a man struggles with being a parent and his jewish identity, loving and hating his father, a story I thought was a bit over the top. Layton handles these matters more softly and naturally.

Although I think the end was a bit too sweet, the story is haunting because so well written, every word has its place and meaning. Son and father, two characters you immediately will embrace to your heart. Both far from being a hero, but as humans struggling with history, family and love.

* The book hasn’t been translated in Dutch, that is why the review is in English.